Nowadays I am preparing for the OCP, I’ve come to the topic of instanceof operator and casting in Java. I had obstacles in understanding the complete differences between Upcasting and Downcasting, so after a brief google search I’ve found very useful resources to apprehend the subject. Especially this post has given me such inspirational insights on the clear terms. Moreover related to the topic, I was also curious about the complete meanings of implicit and explicit castings and at this link I found really  clear description with sample code snippets  . All the terms seem to be identical at some point, and the below I try to explain as clearly as possible.

Implicit Casting:An implicit cast yields to that you don’t have to write code for the cast

Explicit Casting: An explicit cast dictates that you are responsible of providing the cast 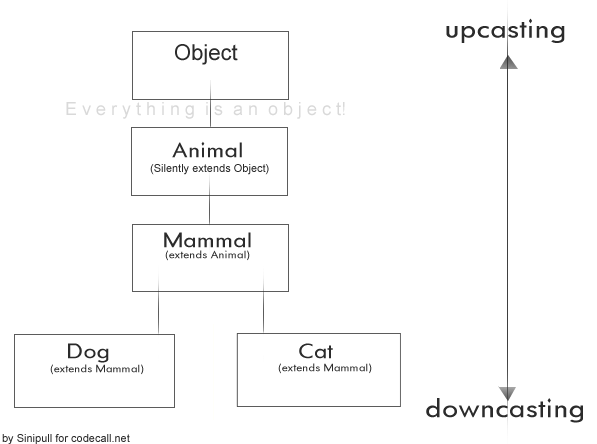 Up casting: Done by the compiler automatically, this is to cast the base object to the derived object

Down casting: Done by the programmer manually.